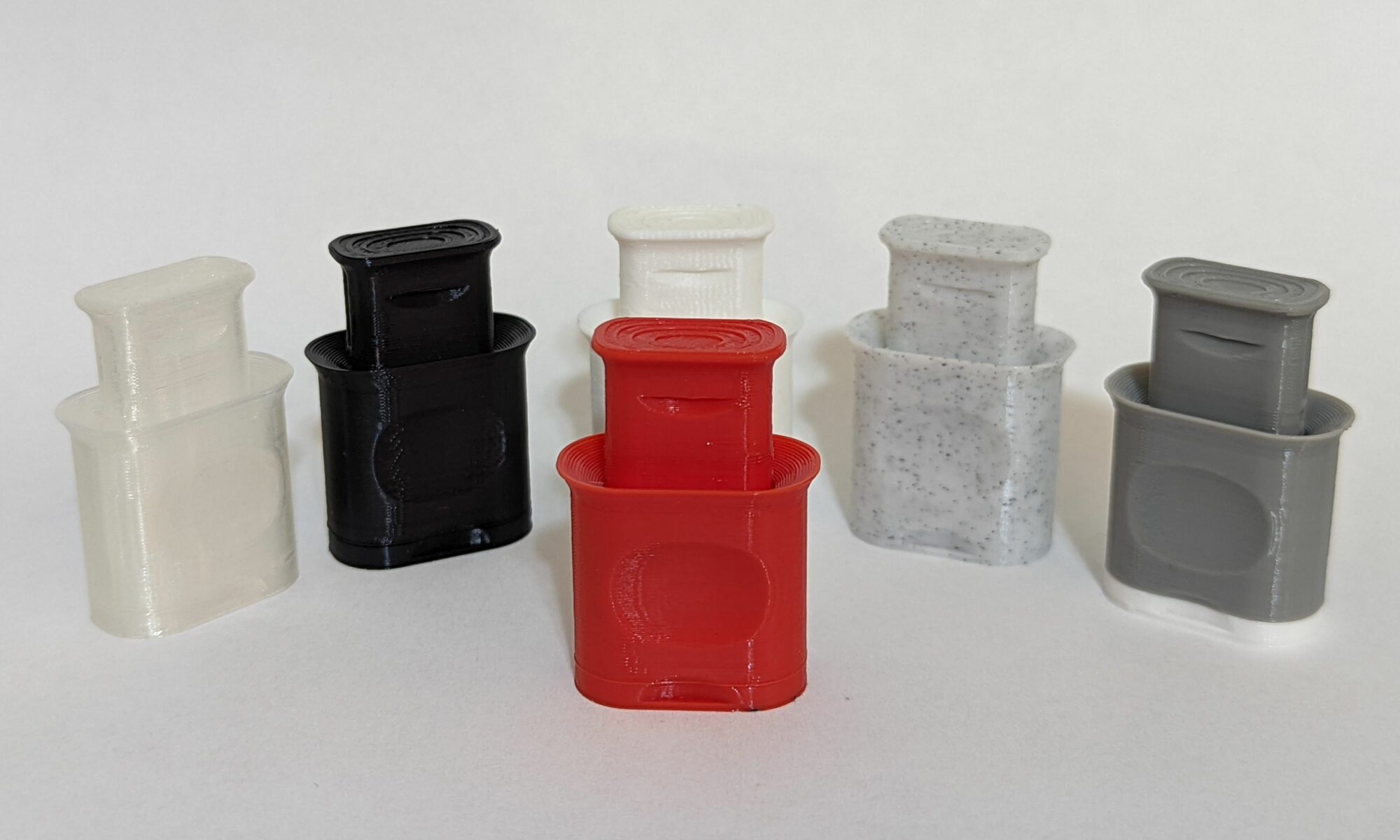 After spending a few hours over a couple of days doing some rapid prototyping, I ended up with a simple design that packs a bunch of nice little features into a compact fidget toy. The original intent of this design was a packing tool for a vaporizer, but the more I tinkered with the design and 3D printed prototypes, I realized it felt like a nifty little fidget toy too!

To start, I used a caliper to measure the internal dimensions of the vaporizer’s oven. I then translated those dimensions into a 2D drawing in Rhino. The polyline was then offset slightly to provide some clearance to fit into the oven. From there the polyline was extruded to create the base design for prototype #1. For fun and out of curiosity I also added a small cutout intended as a fingernail catch, and then 3D printed the initial prototype which was then used to confirm proper dimensions. The fit was a little snug, so I reduced the size a little bit before printing and testing prototype #2, which provided a much better fit.

Next up, I increased the overall length of the extrusion to provide a little more surface area to grab on to. After that I began testing the fit for an outer sleeve. Once I was happy with how the two pieces fit together, I realized that it would be ideal if these pieces could stay together (without unintentionally separating), so I began experimenting with adding some locking features to both the extrusion and the sleeve. Initially only one small bump was added to the sleeve as well as a groove along most of one side of the extrusion. This was somewhat effective, but I found that the two pieces could still separate pretty easily on their own. I continued experimenting with the “bump-n-groove” idea, until I found a configuration that worked nicely.

Because this was originally intended for use with relatively loose materials, I also added a scoop shaped rim around one end of the sleeve. This makes scooping material into it much easier!

With the locking extrusion and sleeve designs out of the way, I felt like there were still a few areas of opportunity that I wanted to cover/explore. I wanted this design to be somewhat ergonomic, so in addition to the fingernail catch, I added some ergonomic cutouts on the sleeve which serve as points for the user to grasp onto. I also flared out one end of the extrusion and shaped it in such a way that it also affords pushing and pulling of the extrusion.

From there I also created a cap that fits into one end of the sleeve. It was important for the cap to fit relatively snugly, but also for it to be easy enough to remove without much force. After a couple quick iterations, I settled on a cap design which did just that. I also added another fingernail catch to the cap to make removing it easier.

Looking back on the original intent of this design, I realized it might be useful (or fun, at least) for making little pellets out of various materials. After trying it a few times myself, I realized that it was a little difficult to even roughly determine the thickness of a pellet you were making until it was already made, so I decided to also add a simple cutout on the side of the extrusion which can be used to gauge the thickness of the pellet you are pressing.

I also found that some materials tend to get stuck to the extrusion and/or cap, so I started experimenting with some different textures on the cap. I ultimately decided that a flat cap is still going to retain the least material, and thanks to my ability to prototype these caps rapidly, I now feel pretty confident of that.

While I still consider this “for fun” design a work in progress, that’s about it for now! I am now thinking of what other features can be added or changed on the current design. Perhaps the extrusion and/or sleeve could be longer, or maybe some texture/ridges could be added to the sides of the sleeve for additional grip and tactile stimulation.